Radio Can Get Out the Vote In less than a month, Americans from all walks of life will use the opportunity to make their voices heard. They will vote.

To say that this election will be like no other would be a great understatement. While campaign advertising started early, over the next few weeks, the airwaves will be inundated with information, facts and promises to influence and sway voters. During this emotionally charged year, connecting personally will be vital to the success of a candidate’s campaign. No other medium connects and engages personally more than broadcast radio.

Some of the reasons that people tune into radio is to hear favorite songs, find out what’s going on locally and because it’s easy. But some of the other reasons are personal – because of the hosts, the connection with their radio station and to get into a better mood and escape life’s pressures, according to Techsurvey 2020. Connecting with radio listeners who are engaged on a very personal level with the station they tune into is the perfect environment for political candidates to deliver their message.

Radio reaches 88% of adults who vote in presidential elections and 90% of Hispanics and Blacks / African Americans. In today’s world, people use all means available to them to learn and research a candidate’s campaign and platforms. People will search on the internet or use various apps to educate themselves about what candidates stand for. Radio’s reach is strong there too. Radio reaches 89% of adults who have used the internet or app to research a politician’s platform in the past month. When it comes to Blacks / African Americans and Latinos, radio’s reach is even higher – 92% and 90%, respectively.

Candidates will also use TV to get their message out, but not everyone is a heavy TV viewer. Radio’s reach is strong against light TV viewers who are registered to vote as well as heavy TV viewers. 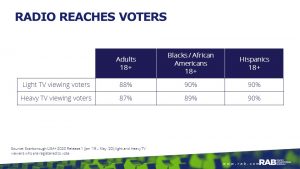 It’s not just TV. When it comes to other audio sources, radio’s reach is unparalleled. Radio has the highest share of audio among potential voters compared to other audio options, like pureplays or satellite radio. 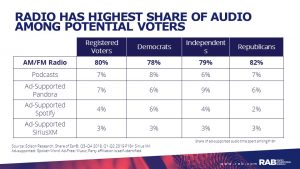 Without a doubt, radio can get out the vote. Not only does it play an important role in the lives of listeners, but radio can boost any political candidate’s campaign reach. There’s less than 30 days for political candidates to tap into what radio does best – deliver a message to listeners in an emotionally engaging environment.